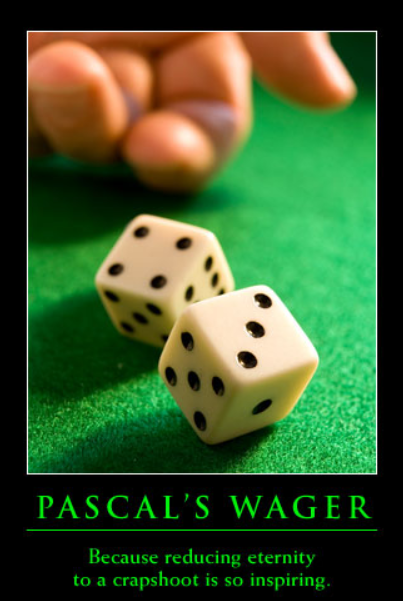 One of my least favorite apologetic arguments is Pascal’s wager, especially in its most common form.

Scripture does not back this weak argument. Scripture says “The heavens declare the glory of God” (Psalm 19:1a) and “For what can be known about God is plain to them, because God has shown it to them.” (Romans 1:19)

The Bible also says, “And if Christ has not been raised, your faith is futile and you are still in your sins. Then those also who have fallen asleep in Christ have perished. If in Christ we have hope in this life only, we are of all people most to be pitied.” (1 Cor. 15:17-19)

Cults such as Global Warmists and Branch Covidians apply Pascal’s wager to their thinking. Just as Pascal’s wager fails when defending the truth of Christianity, it fails also when trying to defend cultish beliefs.

Global Warmists make arguments like like this: “Even if mankind is not causing climate change, and we clean up the environment, we are left with a clean environment, so we are better off.” They are saying it is worth making the bet that man made global warming is real, because if it is real, and we avert it, we have averted tragedy. If it is not real, and we practice the policies that would have prevented it had it been real, we are left with a cleaner environment. Therefore, we might as well enact policies as if it were real. However, this fails to account for the real consequences of following the Warmism cult. It would mean less access to energy, lower food production, more climate related deaths, and a lower quality of life, particularly for the most poor. The cultists ignore the ante of the wager.

Branch Covidian cultists made the same mistake, ignoring the ante. They made the claim that even if the virus doesn’t spread the way that they anticipated, or isn’t as dangerous as they claimed, it would still make sense to follow the lockdown measures, because following them would cause some minor inconvenience, but not following them could cause massive tragedies. We now have data comparing areas that enacted strict mitigation policies, and we can compare it to areas that had more relaxed policies, and the evidence shows very little difference. We also know that the ante was a lot higher than some minor inconveniences. The economic repercussions have been enormous. More people in third world countries will die of preventable diseases. More people will starve. Children have regressed educationally and developmentally. Rates of depression and suicide ideation are up. Implementing lockdowns cause more harm than some minor inconveniences.

Like the Warmists and the Branch Covidians, Pascal was ignoring the ante in his famous wager. So, what is the ante of following Jesus?

Jesus tells a parable about someone who is willing to sell every possession he has to buy a single pearl. The seller knows that what he has is nothing compared to the immeasurable value of this pearl. So, he gives up everything, and buys it.

That is the ante for following Jesus. Everything.

And, we will find great joy in doing so.

If we value Jesus far more than everything else, then Pascal’s wager is nonsensical.