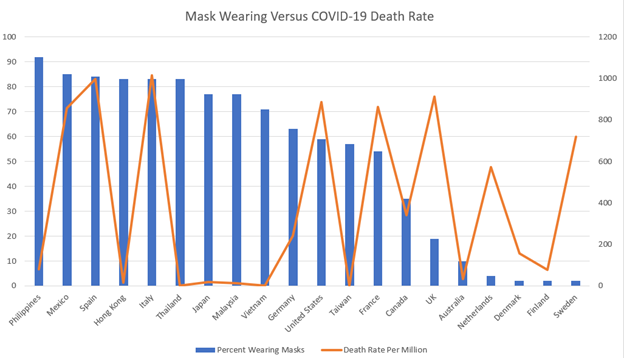 The New York Times published an article about the rate of mask wearing in various countries. I used the data from that article, and compared it to the per capita death rate from COVID-19 from World O Meters. As you can see from the chart above, this does not paint a pretty picture for those saying that we need more people wearing masks. In fact, the correlation coefficient for the two sets of data was -0.03. In other words, there is no correlation between the rate at which people wear masks, and the death rates in those countries.

You may object and say that the mask wearing data is a few months old. However, it is highly unlikely that people were convinced of the need to wear masks in the summer for the Northern Hemisphere, when masks are the most uncomfortable, and suddenly decided to stop wearing masks when the weather cooled. Given the media’s relentless insistence that anyone who does not wear a mask wants to kill their grandma, it’s highly unlikely that people broke the habit of wearing masks. So, it’s likely that the rate of mask wearing remained consistent, or perhaps increased in the countries listed.

I understand people feel like they need to do something about this virus. They feel like wearing a mask is contributing to a cure. But, don’t mistake your feelings for science. And don’t force others into your delusion. The next time you see someone not wearing a mask, don’t point your finger, and yell “science denier.” They may have more data than you have.