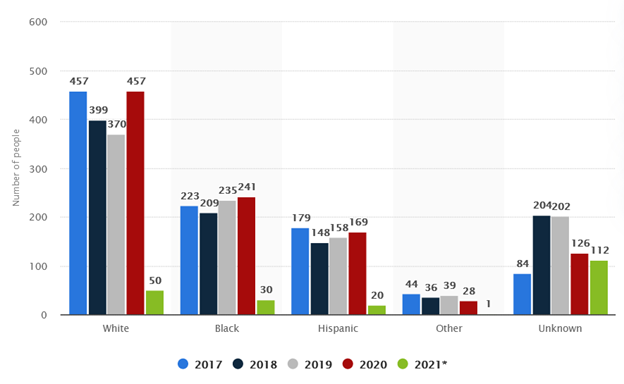 The woke left cannot be serious in what they claim are their motives and beliefs. I don’t mean that in the pejorative sense of just calling them foolish. I mean that their behavior absolutely contradicts what they say they believe. But, before getting into that, let’s look at some statistics.

Let’s imagine that police shootings were completely random. To match their representation of the American population, we could put 100 marbles in a bag. In that bag 62 marbles would be white, 13 would be black, 18 would be brown (to represent Hispanic or Latino.) The other 7 marbles could be swirl color marbles to represent Native Americans, Asian, Pacific Islanders, two or more races, etc.

According to the Woke left, the likelihood of someone being shot by police ought to mirror the likelihood of pulling a marble representing that race.  As stated above, this is not the case. Black people are twice as likely to be killed by police as their representation in the broader community would indicate.

However, let’s imagine a second marble bag, this one representing victims of police shootings. In this bag, 51 marbles would be white, 27 would be black, and 19 would be brown. The other three marbles would be the swirls. If we are sticking to the rule of proportionality, then the likelihood of a casualty of a police shooting being highlighted on the news should mirror the likelihood of pulling one of those colored marbles out of a bag. Over half of the news coverage about police violence should talk about white people being shot by police.

We know this is not the case. The news media disproportionately share stories of Black people being killed by police. We are more likely to know the names of Breonna Taylors than we are to know the names of Duncan Lemps. This represents a choice of the liberal media to promote an agenda. Let’s examine the logic of that agenda.

Wokists make two arguments which cannot both be true, when we look at their behavior. First, they claim that America is a white supremacist society. Second, they claim they want to defund the police. Let’s assume both of these statements are true.

If America is a white supremacist nation, then the average American would care more about the death of a White person than the death of a Black person. After all, that is pretty much the definition of white supremacism – to consider White people to be supreme. Therefore, if you believed that America was a white supremacist nation, and if you wanted the average American to get behind a movement to defund the police, then you would want news stories to highlight the 457 White people who were killed by police, rather than the 241 Black people who were killed by police.

However, they are not doing this. They are doing the exact opposite of how you would expect them to behave if they truly thought that America was a white supremacist nation and if they wanted to defund the police.

Therefore, we are left with three possibilities.

The first possibility is that the woke establishment does not think America is a white supremacist society, but they do want the police to be defunded. Therefore, they rely on showing that police are racist, to get people who are not white supremacists, the majority of society, to support defunding the police.

And finally, the third possibility is that they are completely illogical. If they are completely illogical, then we wouldn’t expect their behavior to make logical sense. They could be completely honest, and actually believe both that America is a white supremacist nation, and that police should be defunded, but because they are incapable of logical thought, they could behave in a manner that is the exact opposite of how someone with those beliefs should behave to achieve their stated goals.

If you can think of another alternative to why they would disproportionately highlight Black people who were killed by police, feel free to leave it in the comments.