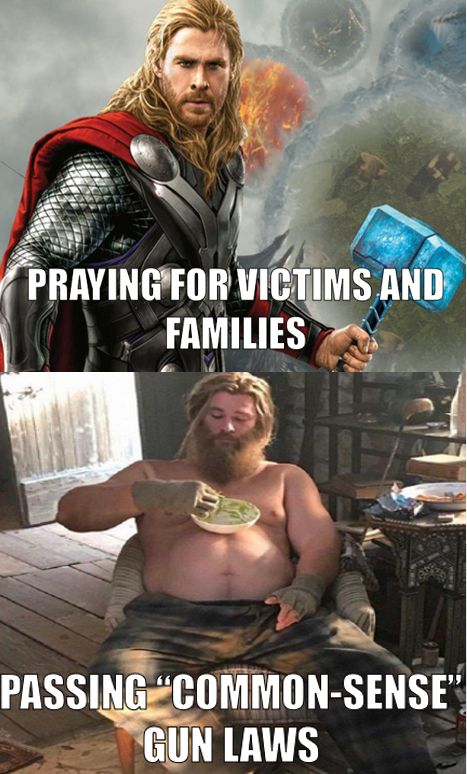 This argument fails on both ends. On the one side, prayers are far more powerful than the left assumes. On the other side, “common-sense” gun laws are far more harmful than helpful.

Until 1962, prayer was a common practice in American schools. Even more so than simply in American schools, prayer was a common practice in American life. Many TV shows regularly showed families sitting down and praying together, or individuals crying out to God for support. It is not surprising that a society that values prayer also has it in their schools. (Now, let me be clear, I do not support public school teachers leading students in prayer. This would lead to a disastrous situation where government employees are influencing the theology of our youth. I am merely pointing out that prayer was common place in public schools until the 1960s.)

Also common place in public schools decades ago were guns. Many schools had shooting clubs. Students would get up early, and go hunting, throw their gun in the gun rack in their truck, and drive to school. And despite this prevalence of guns, mass school shootings were rare.

However, in 1990, Congress passed the Gun Free School Zones Act. So, both prayer and guns were barred from school. The effects have been less than stellar.

Let’s take a look at the “common-sense” gun laws that are being proposed, and ask if any of them would have curtailed the Colorado shooting this week.

Universal Background Checks – These are already required by the federal government as well as the state of Colorado. It did not stop the shooting.

Magazine Limits – Colorado has a 15-round limit, and Boulder has a 10-round limit. This did not stop the mass shooting.

“Red Flag” Laws for extreme risk individuals – Colorado has this in place. It did not stop the mass shooting.

Closing the “Gun Show Loophole” – These have been closed for a while in Colorado. Yet the shooting still happened.

Prohibiting people with restraining orders against them from firearm ownership – Colorado has this. It didn’t work.

Assault Weapons Ban – The city of Boulder has this, and yet there was still a mass shooting.