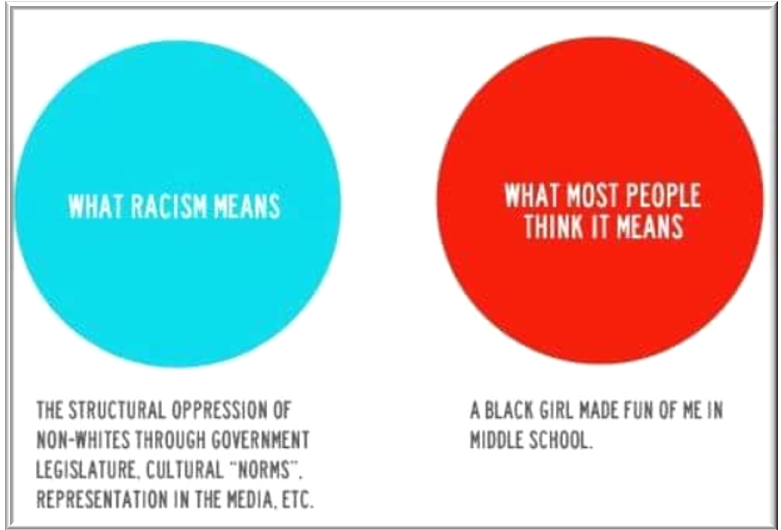 The development of language is one of the beautiful elements in human history. From a handful of languages after the diaspora of man following the incident at Babel, the earth developed thousands of different languages. No dictator, King, President, or bureaucracy developed the languages we use. Spontaneous order developed them. To know if this yellow fruit you hold in your hand is a banana, you did not contact the “Department of Words.” People, in community, determined that this yellow fruit you hold in your hand would be called “a banana.” Or, maybe your community decided to call it “el plátano.” Or, perhaps “muz.”

What is especially concerning about this redefinition of racism is that it is a bait and switch. Americans despise racism. America is one of the most anti-racist societies that ever existed. If you say something that is racist, you will likely lose your job. If you treat people in a racist way, family members will disown you. People who are indeed racist try to keep it to themselves, knowing society will not tolerate it. Therefore, you hear people use phrases like, “Racist dog whistles.” Racists must use “dog whistles,” because society does not accept racism, so they have to keep it under a veil.

But America is only anti-racist under the definition that we all accept for racism. To sell a myth that America is racist, the term “racism” must be redefined. However, rather than redefine an existing term, why didn’t the race hustlers simply create a new term? The answer is clear. They wanted to use a term associated with something people already despised. This is a bait and switch. Get you to hate X. And then replace X with Y, but call Y X.

If we use the old definition of racism, a statement like, “All white people are privileged,” would be correctly defined as “racist.” You would be making a judgement about an entire group of people based not on their individual characteristics, or the content of their character, but exclusively based on the color of their skin. It is racist. But the race hustlers want to be able to make racist claims about white people. Therefore, they redefine racism to mean something completely different. Under this new definition, they can make whatever racist claims they want. They can judge an entire group of people, based on nothing more than the color of their skin. And they can feel self-righteous while doing it.