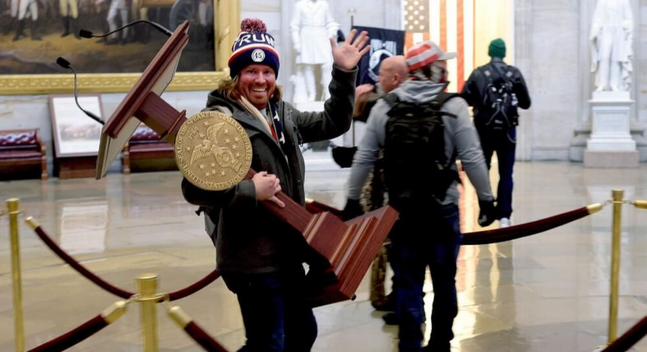 For the past four years, we heard American progressives warn about the impending “fascism” Trump would bring to America.

As is often the case, projection was at work. Progressives thought about what they would do if they had a charismatic leader with a large devoted following, and projected it onto the other side. That terrified them.

Let’s look at recent events through the lens of fascism.

One of the central characteristics of fascism is its intense nationalism. The nation is given almost a religious appeal. When protesters entered the Capitol building last week, we heard people describe it as a “Sacred symbol of democracy.” This national image was presented through a religious lens. It doesn’t get more nationalistic than that.

Another common characteristic of fascism is a distrust of classical liberal values. Let’s not confuse classical liberalism with modern liberalism. Classical liberalism is the belief in individual rights ahead of the collective. Fascists believe that the nation should always come first. Individual rights, like freedom of religion, or freedom of speech, can be dangerous barriers to the collective well being of the nation. Therefore, it is ideal to limit these liberties. We see that these rights have been severely limited in the past week by the American Progressive movement.

Economically, fascism follows a similar line as they do with civil liberties. Private corporations are allowed to exist, but they must do the bidding of the nation. The nation is more important than the business owners. Therefore, in a fascist state, you will see a close alliance between major corporations and the government. In fact, it’s often not necessary for the government to limit civil liberties for the good of the nation. They can have their puppets in industry take charge. We saw that happen last week with how major social media corporations silenced opposition.

While focus on race is not a universal feature of fascism (Fascist Italy did not focus on race until they formed an alliance with Germany) the soil is always ripe for a focus on race, in particular with one race serving as a scapegoat. Nazi Germany used Jews as the scapegoat. They were seen as historical oppressors. American progressives today paint white males with the same brush Nazis used to paint Jews. As Biden is building his administration, he is purging white males from the highest offices. (A bit ironic, since Biden himself is a white male, but not unprecedented, as there were always rumors that Hitler was part Jewish.)

The final characteristic of Fascism is a charismatic leader. Fortunately, Biden has about has much charisma as a sole insert for a boot. So, Biden might save us from the Fascism of the American Progressive movement after all.