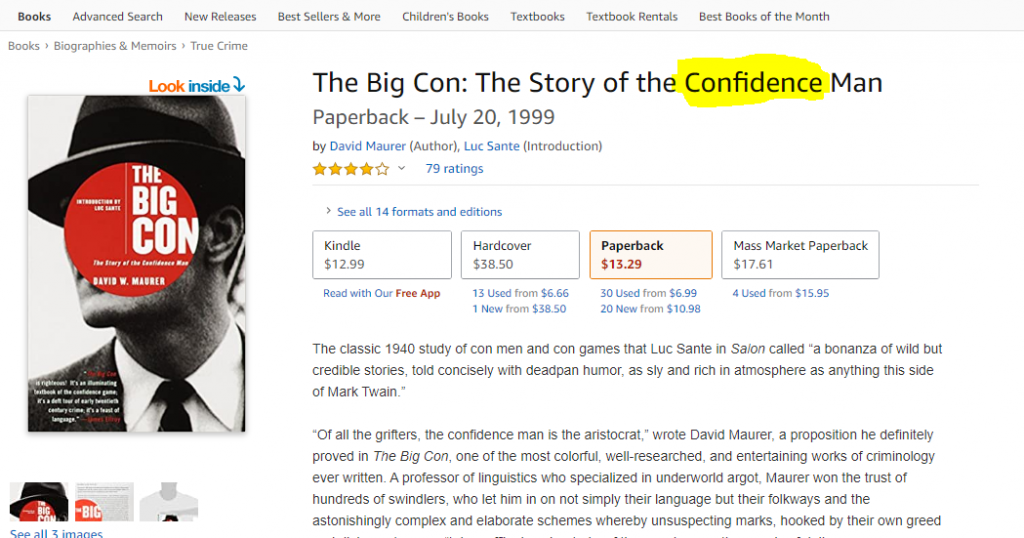 The reason why good (and REAL) Con Men never get caught is because, to put it bluntly, they never get greedy.

When Cons gain the CONfidnece of their marks, the con is on…it’s very easy…you just do exactly the opposite of what I have been previously doing on social media for the last 10+ years……I know, right?……..but anyway, that is, you never want to argue with your mark on ANYTHING, or for ANY REASON…..learn this…….ALWAYS…AGREE………ALWAYS!

…in other words, you simply agree with all of them, feed their biases, gain their trust, trigger their greed response, and take their money.

The reason why great Cons never get caught (the bad ones always do) is because they never go for the BIG CON…the reason is that when people lose small, they might become piercingly enraged, but, the last thing they’ll do is tell others….because people, by nature, are extremely vain and absolutely terrified of being made the fool of, or being made to feel dumb…it’s our very intellect, or our BELIEF in our own intellect that is also our greatest weakness in the Con Game.

When people get conned big enough, they tell everyone..including the authorities ….guys like Bernie Madoff are bad cons because they get really greedy…and that’s why they get caught …in other words they get over-CONfident in their own game…and they make mistakes …so they essentially, simply, con themselves ….

But the News Media has all so distracted the American People with monkey brained basic shit nonsense every day, such as skin color and genitalia, that they will, seemingly, never get caught.

If you’re reacting ANGRILY at me to anything I’ve posted on this site then that is the exact evidence of the fact that you are being hustled, because you don’t actually know you’re being hustled.

……you BELIEVE highly sophisticated Con Men…who have, to date, not gotten too greedy.

But I’m certain that, with these riots*, which ARE now burning America, that they, have finally, overplayed their hand.

And it’s only a short matter of time before all of the American people finally rise up together against them….in the name and interest of real peace, prosperity, and what it always was once meant to be an American.

*This post was written during the June 2020 race riots, all triggered by the George Floyd death, eventually tried as Murder, but in which the global corporate news and advertising agencies made billions of $$$ in profit from.