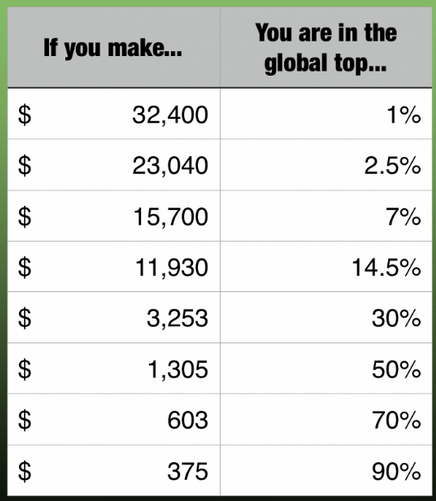 Around the time of the Occupy movement, I compared a day in my life to the day in the life of two other hypothetical people: A 1%er and a truly poverty stricken person. I suggest doing this from time to time. It helps you to be thankful for what you have.

I woke up this morning and crawled out of my full size bed I share with my wife.

The 1% rich person woke up this morning, and crawled out of a king sized bed he slept in alone.

The 1% poor person did not have a bed in which to sleep, but woke up to the cold ground.

I would say I am more similar to the rich than the poor.

Next, I relieved myself in my porcelain toilet.

The wealthy 1% relieved himself in his solid gold toilet.

The 1% poor person is happy that a Christian missionary team recently dug a latrine in his area. He waited in line, and relieved himself there.

I would say I am more similar to the rich than the poor.

Next, I did my usual morning workout. Fifteen miles on my stationary while listening to my favorite podcast from iPod speakers.

The wealthy 1% went to his personal gym, met with his personal trainer, and had a much more targeted workout than I had, while listening to music on digital surround sound.

The poorest 1% could not even fathom exercising for pleasure, or to work off extra calories, as he never had that problem.

Next, I took a shower.

The wealthy 1%er also took a shower. His shower was bigger and fancier than mine.

Two weeks ago, the poorest 1% got to bathe in creek, where runoff from the latrine flowed.

Next, I made myself breakfast. I had dozens of different things from which to choose, but I decided upon a microwave sausage sandwich with an egg that I scrambled.

The wealthy 1%er had ordered the night before from hundreds of different things, and his cook had his dish ready for him.

Next, I went to work, from my house, where I talked to people and typed to people. (The contents of what I said and typed were unique to my position, but what I was physically doing was typing and talking.)

The rich man also went to work, typing and talking.

The poor person did back breaking labor for the next 16 hours.

At lunch time, I grabbed some food that my wife had made, and ate while I was on the phone with someone.

At lunch time, the rich person went to a restaurant to eat with the person to whom he was talking.

The poor person did not have a lunch.

I am much closer to the rich person than the poor person.

After working through lunch, I was able to take a 15 minute break, and since I work from home, and my kids are home schooled, I was lucky enough to be able to play a game with my kids related to their history lesson.

The rich person was able to take a 15 minute break too, where he drank some specialty blend coffee. His kids were off to an elite school.

The poor person was still working. His oldest daughter had recently died of influenza. His youngest son, and his wife, had both died during delivery. His only remaining daughter was working at a shoe factory.

I am doing better than the rich person here.

After work, I checked the news on the Internet.

After work, the rich person read the New York Times.

The poor person was still working.

I am again doing better than the rich person.

After checking the news, I had dinner with my family: Stromboli, that I and my youngest daughter helped my wife to make.

After checking the news, the rich person sat down with his wife and daughter to a meal prepared by an award winning chef.

Finally, the poor is able to eat again. He has rice.

I am closer to the rich than the poor.

Following dinner, I sat down next to watch a Netflix movie on my 48 in flat screen plasma, on my worn out sofa, next to my wife.

The rich person sat down and watched a personal screening of the latest blockbuster release in his personal theater.

The poor person does not understand what a movie is.

Next, I open up a paperback book, and read for a little bit.

Next, the rich opens up a leather bound and reads for a little bit.

The poor person does not know how to read.

Finally, I brush my teeth, and head back to that full sized bed.

Finally, the rich person brushes his teeth, and heads back to his king sized bed.

Finally, the poor person cuddles up in a blanket on the ground, and falls asleep.

In no time during his day, did the poor person have time to complain about my lifestyle.