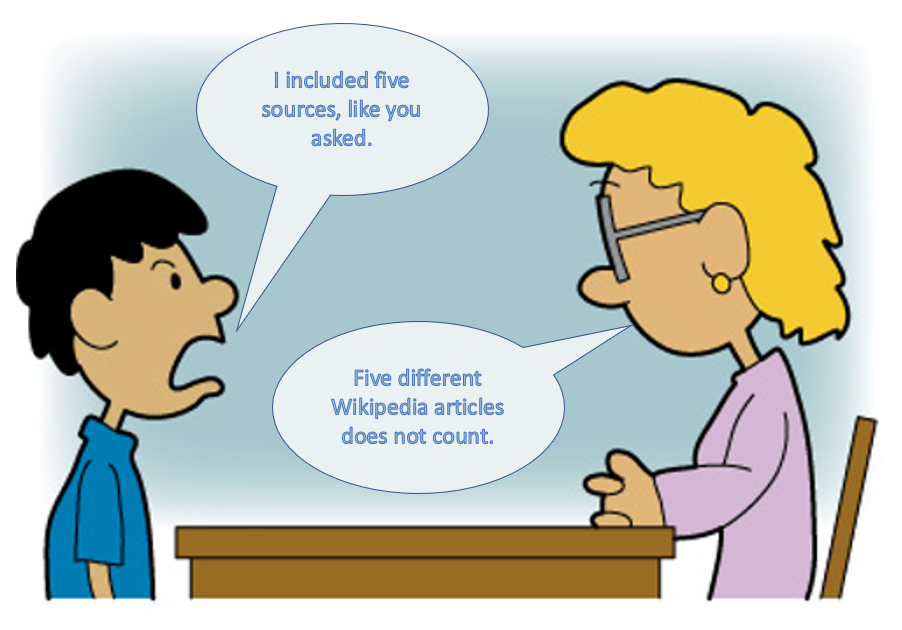 We homeschooled my daughters for most of their school careers. However, there were times when they desired to attend a public school, and we allowed this experiment to occur. The first year that we did this, my oldest daughter had a research assignment. (I was pleasantly surprised that they assigned this as early as the fourth grade.) One of the rules was that she was not allowed to use Wikipedia as a source. This is not surprising. It is a rule used by most teachers at the Middle School where I work. It was a rule at the high school where I used to work. And, I first encountered this rule as a college student in the early days of Wikipedia.

This rule seemed rational enough. Wikipedia articles can be edited by anyone; therefore, they can’t be trusted. In fact, to illustrate this, I edited the Wikipedia page for my hometown of Meyersdale, PA, with some false information. It’s a very small town, so nobody would notice this edit, and I could use is as an example for why you can’t trust Wikipedia. However, there was a problem. Within a few days, my edits were removed by those “just anyones” who can edit Wikipedia. Apparently, those “just anyones” had an interest in keeping the information accurate, even about something as remote of my hometown of just over 2,000 people.

In Libertarian circles, you will hear of the concept of “spontaneous order.” This is similar to the great Scottish economic philosopher, Adam Smith’s, idea of the invisible hand. Thousands of people working, without any central authority, can create amazing things. The historian Thomas Woods uses the development of the English language as his example of spontaneous order. There was never some central bureau in England dictating that the word “dog” would mean a domesticated animal of the canine breed; that the word, “up” would mean in the direction away from the Earth; or that the word “jump” would mean to propel oneself away from the ground. There was no agency that said that in the sentence, “The dog jumped up,” the article “the” would refer to a specific dog, as opposed to a more generalized dog in the statement, “A dog jumped up.” This all developed spontaneously, by thousands of people acting naturally.

But, how accurate is Wikipedia? The British Journal Nature published a study comparing the accuracy of Wikipedia and the Encyclopedia Britannica. After reviewing articles from both Wikipedia and Britannica, without knowing which were which, experts counted eight serious errors. Half were in Wikipedia. The other half were in Britannica. They were equally accurate.

So, why does Wikipedia get the bad reputation? Professors in Universities make money by reviewing and publishing writings. When they require a student to use journals or academic literature, they are forcing those students to support an industry of which they are a part. These peer reviewed journals, in some cases, can be less accurate than Wikipedia. For example, in 2012, the journal “Advances in Pure Mathematics,” published an article titled, “Independent, Negative, Canonically Turing Arrows of Equations and Problems in Applied Formal PDE.” If that sounds like nonsense to you, it’s because it is! It was a completely computer generated paper of gibberish. However, it made it into a publication that would be perfectly acceptable to cite in most academic papers. Nature reported that in early 2014, two academic publishing companies were forced to withdraw more than 120 papers that were entirely computer generated gibberish.

University professors, interested in protecting their fellow academia, allow research only from their pre-approved publications. These professors train teachers, who go on to expect the same dubious standard from secondary and elementary school students.

It is important to note that Wikipedia did contain errors in the Nature study. And it was only as accurate as Encyclopedia Britannica, and Encyclopedias are not the best sources of information, either. So, how should teachers teach students to use Wikipedia? Should they have them avoid it completely?

My recommendation would be that they should use Wikipedia the same way anyone who has done serious research has used many general sources. Use it as a starting point to find other sources. Most Wikipedia pages are lush with citations throughout the articles. Students should be taught to check these citations. Examine them for rationale. Look at the methodologies used in collecting the information. Students would have to be critical thinkers. When teachers tell students, “You are not allowed to use Wikipedia,” they are not allowing students to make those critical decisions on their own.